I worked in an office for eight months after graduating from Cornell. Didn’t like sitting at a desk. I like working with cows. Then I asked myself, do I want to bust my butt working for someone else’s farm, or do I want to do that for my family? I want to be around people as dedicated as I am.
– Emily Chittenden 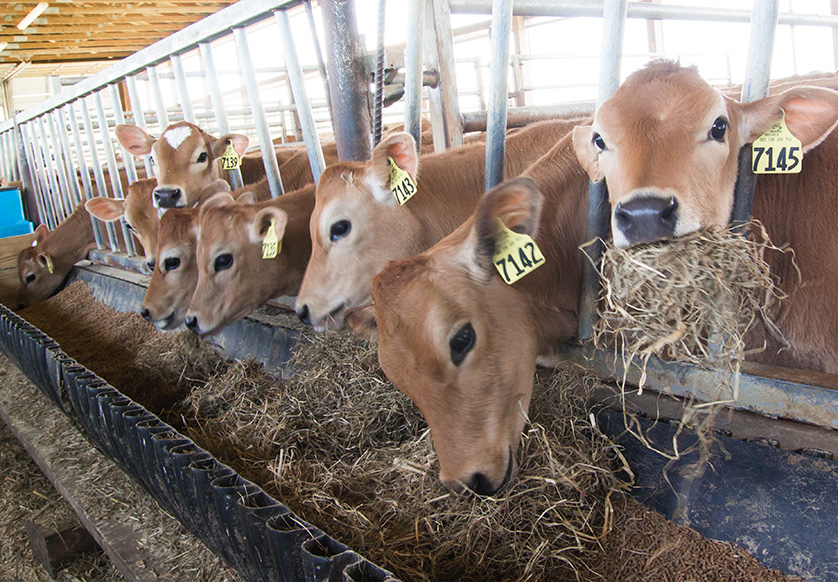 Paul Chittenden is a third-generation farmer who farms with his three sons, Brian, Alan, and Nate, and numerous grandchildren on Dutch Hollow Farm, the biggest herd member in Hudson Valley Fresh. While the Chittenden family is of course known for their premium quality, high butterfat content milk, they are also equally known for their love of Jerseys and their reputation as one of the premiere Jersey breeders in the world.

“My dad got his first jersey in 1925,” Paul continues. “It’s been Jerseys ever since. My grandfather had maybe a dozen cows and when I finished high school in 1962, we were milking 300. My dad was probably as progressive as any dairyman. He was always looking down the road, where are we going, what are we doing.”

These days Dutch Hollow milks 700 cows three times a day, every day, producing around 47,000 pounds of milk, or about 5,000 gallons every day. And their system is designed to keep that milk as fresh and clean as possible. “Every drop passes through the filter and we get it to under 41 degrees within two hours of milking. Our milk doesn’t even touch the air until it leaves the farm,” says one of Paul’s son Nate, who manages the calves with his niece Emily, both graduates of Cornell’s College of Agricultural and Life Sciences.

The Chittenden family is constantly striving to use what they know to farm smarter. “If we’re not looking for ways to improve things, we’re not going to stay in business. This isn’t some God-given right to be farmers. You have to be profitable, efficient, and passionate.” The family continues to look forward in their goal to produce high quality milk in a progressive way and present the next generation the opportunity to continue the family legacy.